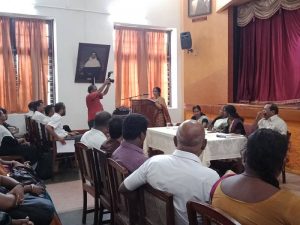 A seminar on the topic ‘Gender Equality in Constitution’ was organised on 8th February 2019 at 2.00 p.m in the Arts Block Auditorium of St.Teresas College. Adv.Sreeja (Member of AILU National Committee) welcomed the gathering. Dr.Sr.Vineetha (Director, St.Teresas College) delivered the Presidential Address.

The first session of the seminar was presented by Adv.Chamki Raj (Treasurer, AILU National Committee). She highlighted that the Constitution provides equal status to women and a ‘positive discrimination’ in favour of women. She gave a brief description about various offenses against women which are punishable and various provisions to safeguard violence and discrimination against women. She also added that society has assigned specific roles to men and women and that we are conditioned to think like that. It is time that we recognise and appreciate the reproductive as well as productive role each woman plays in a society and break from the patriarchal secondary status that is given to women.

The second session of the seminar was proffered by Adv.Thomas Abhraham (Ex-President, High Court Advocate Association).  He gave an insight into the widening gender gap in India even after adoption of various provisions and schemes for women empowerment. Using the UN Population Fund report he showcased the most alarming problem that is being faced by the women in India like domestic violence, pre-birth elimination of females and sexual violence. He suggested that Constitution and provisions alone cannot solve this situation and that religious and cultural practises should not be used as a means to promote gender discrimination.

The last session was by Daya Gayathri (Transgender Student, Member of Dhwayah Arts and Charitable Society). She spoke for equality and justice to Transgender community. She said that even when the constitution provides equal rights to all the gender, they are not even considered in the society as a ‘gender’. She brought to the fore that even when Kerala being the first state in India to unveil transgender policy, still they are insulted and forced out of places. Even when it is the right provided by the Constitution and the Judiciary yet violence against transgender community is not questioned and are ignored as if they are not a part of the society. She concluded by appealing to consider them atleast as ‘Human Beings’.

The vote of thanks was proposed by Adv.Maya (Transgender Board Member, Govt. of Kerala). The seminar came to an end at 3:30 p.m.

Students from dept.of Economics, History and Sociology and the staff as well as Bar council and AILU members participated in the seminar and was a grant success. 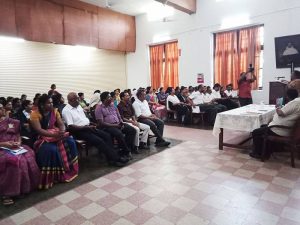