‘Plant-Insect-Human Interactions – Who is the ultimate beneficiary?’

‘Plant-Insect-Human Interactions – Who is the ultimate beneficiary?’

The association organised a talk on 14/7/2017, for the PG students of Botany and Zoology Dept., and Research Scholars of the Botany Department. Dr. P J Wills, Sr. Scientist, Aster MIMS Research Foundation, Aster MIMS, Kozhikode, gave us an insight into  ‘Plant-Insect-Human Interactions – Who is the ultimate beneficiary.’ The talk was on the research findings of Dr. Wills and his team about the incidence of a Dengue like fever caused by the Tiger moth which is dependent on a common plant called Ficus hispida to complete its life cycle. According to his findings, majority of the cases in Kerala diagnosed as dengue haemorrhagic fever are actually the allergic reaction to the scales/fur of tiger moth. The talk indeed opened a new outlook to fever incidences and invited many questions from the audience. 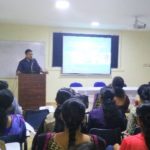