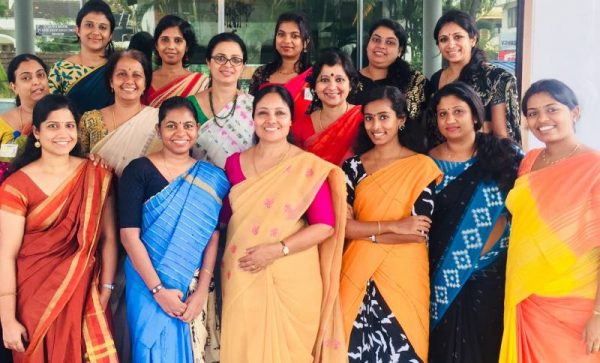 “I entered the portals of   St. Teresa’s College as a student in 1980 and completed my graduation in 1986.  A postgraduate in   English with   First Class from the University of Kerala, I completed my   Ph.D.  in English Language & Literature in the year 2000 from Mahatma Gandhi University.  In 2005   I  joined  London Metropolitan University  , UK  to pursue my  Second M.A   in International English  Language  Teaching & Applied Language  Studies   and has  also   qualified   CELTA  ( Cambridge) in the year 2006 from UK. In 2014 ,  I  have attended the training  programme for  teaching   Science Fiction  and creative  writing  at  the Intensive Institute on SF Literature, State Kansas University  in   June 2014 .  St. Teresa’s College has   given me   inner strength to walk   through complicated terrains and face newer challenges.  Teaching is a ministry of my utmost happiness.   My   Research interest include Critical & Literary Theories (Modernism, & post-Modernism, Body & Culture, Cultural Studies, Modern European Drama, Dalit studies & Language &Linguistics

I was able to contribute in   the National Assessment and   Accreditation   of the College from 1999.  I was a member of the Steering Committee for the third cycle and was responsible for drafting the third Cycle report which   enabled the College to secure commendable score of 3.4 C.G.P A which   became instrumental in securing autonomous status for the College in 2014   . Was nominated to the Governing Council   of the College in 2014   and   took initiative to begin several Need Based   new Programmes for the College. As a member of the Team IQAC   , played a pivotal in   the scientific   restructuring of the Curriculum   2015 under the guidance of Dr, N.J. Rao and Dr. Rajan Gurukkal .   Facilitated the implementation of Learning Management System ( LMS) ,Outcome Based Education, supported  the Faculty to produce 100 Short Learning Objective ( SLO’s ) and was also responsible for the implementation of the State of the Art Media Lab in 2018.

It was my   joint initiative   with the  Director Dr. Sr. Vinitha the Department of English at St. Teresa’s College   became a Research Centre in 2007.  I have  collaborations   with London Metropolitan University , The Richmond University , The American International University  ( UK) ,  The State Kansas University  ( U.S)  and Deakin University Australia,  NPTC  Colleges , Wales , University Of West Scotland  and ACCA (UK) for facilitating research initiatives , twinning Programme and initiate Value Added Programmes like B.Com with ACCA for Commerce Students with the support of ISDC . I was able to establish   the Gunn Centre for Science Fiction Studies   Affiliated to The State Kansas University   to promote creative writing and Science fiction  . Coordinated the first Accredited Summer Exchange Programme for the College with Richmond University   , The American International University, and U.K.   The First International Conference of the College was organized in 2009 with the support of London Metropolitan University U.K. I had the privilege of   preparing   the  content for the Proceedings  on International  Meet on Trans National Education  (2014)  and also for The Global Education Meet  ( 2016) organized  by the Kerala Higher Education Council.”

Curriculum Vitae: Dr. Preeti Kumar
“I have been teaching at St. Teresa’s College since 2004, and have taught courses in Shakespearian drama, Indian Writing in English, European Drama, Literature of the Nineteenth century at the Undergraduate and Post-graduate levels. My research is in the field of Biography, Gender and Gandhian studies, particularly the constructions of masculinity in biographies of national leaders. I have also written and presented papers on Cinema, Cultural Studies, Graphic novels and Graphic biography. I am currently working on how gender is constructed and how it intersects with ‘nation’ in the biographies of political and legendary figures.”

“I have been at St.Teresa’s College(Autonomous) since 1999.As part of the English Studies course I teach Western Aesthetics, Eastern Aesthetics and Postmodern fiction to Postgraduate students and Creative Writing, Study of Poetry and General English to the Graduate students. My research interests include African literature and Comparative Mythology.”

Tania Mary Vivera is an Assistant Professor at the Department of English, St.Teresa’s College where she has been a faculty member since 2010. She teaches courses in general English, short fiction, linguistics, genders studies, experimental fiction and translation studies at the undergraduate and postgraduate levels. Her primary area of interest lies in experimental fiction and its cognitive underpinnings. Her research focuses on the adaptive nexus between experimental fiction, multimodality and cognitive narratology. She has participated in over 40 conferences and workshops and has published numerous papers in peer reviewed international journals on the works of Mark. Z Danielewski, Graham Rawle, Jonathan Safran Foer, Tom Phillips and Nick Bantock. For the past six years she has been associated with developing the student entrepreneurship schemata through entrepreneurship awareness programmes and workshops which has led to the formation of incubation units governed by students. She enjoys reading and traveling and experiencing the hidden contours of life and its nebulous, liminal existence.

Qualifications: MA, Ph.D., NET
Areas of Interest: Twentieth-Century Fiction, History of English Literature
Email: [email protected]
Curriculum Vitae: Dr. Jisha John
“I have been teaching in the department of English since 2010. I am interested in post twentieth century literature in general with special thrust on fiction and poetry. I teach literary criticism, British history, modernist and postmodernist literature. My area of research is globalisation and literature. I am also interested in Women’s and Gender studies.”

“I have been working in the Department of English and Centre for Research since 2010.  At the undergraduate level, I teach communication skills, methodology of literary studies and the history of English literature. Indian literature, modernism and modernist literature,the post-theory scenario, and literature of the empire are my areas of deliberation at the postgraduate level. My research mainly concentrates on the nexus between literature, history and culture. I have done extensive research on the postcolonial leanings in the works of Chinua Achebe; spirituality in Paulo Coelho; and the postmodern discourse of the ‘Other’ in Orhan Pamuk’s oeuvre.”

“I completed research in feminist fiction. I have a post graduate diploma in journalism from Symbiosis. I have also done CELTA from London, U K. I am interested in teaching literary theory, gender studies and practices of translation. I also teach English language to adult learners. I have published papers on fiction, nuances of translation and  multiple cultural practices in Kerala. I am interested in female activism and their projection in social media.”

“I have been teaching at the College since 2006 and lecture on media, films, creative writing and informatics. The introduction to media classes are a joy to teach, as are those on writing creatively. My areas of research interest includes film studies, media studies and culture studies. I have co-authored two books on writing for media and have written several articles for a national newspaper.”

Inspiring her students to follow their aspirations and unearth their talents has always been her passion. After completing MA  English from Institute of English, Trivandrum in 2014,  Ms. Athira Babu joined St. Teresa’s College in 2015. Having been appointed as the NSS programme officer in 2017, she has had the privilege to be part of a multitude of extension activities. She has organised various workshops and conferences and for the last three years, she has been associated with the kochi international literary festival as a co-ordinator.  Ms. Athira teaches common course English for undergraduate students.Inculcating a love for poetry, gender studies, translation studies and the history of English literature in students has been given paramount priority by her. Being passionate about the subtleties of photography, classical dance and literature she wishes to explore the coalescence of art and literature.

Tessa Fani Jose is an Assistant Professor of English literature at the department of English, St. Teresa’s College, Ernakulam where she has been a faculty member since 2015. Ms. Jose completed her M.A in English Literature from Bangalore University and her undergraduate studies at Christ College, Bangalore. With over seven years of experience in teaching and research, her core focus areas include studying the re-emergence of colonial structure in a postmodern-postcolonial world and exploring the tools of colonialism and it’s spaces. She has attended over 30conferences and workshops. She has published two papers in post colonial literature in peer-reviewed journals and is currently working on Marxist reading of Marvel’s superheroes. For the last three years, she has been associated with the Kochi International Book Festival in her role as co coordinator. Ms. Jose is based in Aroor, Cochin where she lives with her family. She enjoys traveling , local ballads and writing and hopes to one day travel all over India and write a book on dying stories of local culture and traditions.

“I have been teaching at St. Teresa’s since 2015, primarily engaging the common course classes. Inspiring the love for English language and literature in students who come from eclectic academic background with diverse interests, and encouraging them to read between the lines and dream beyond the texts have been a truly rewarding experience. My scholarly pursuits are devoted to the enquiry of how the novel as a literary genre evolved not only in the English speaking world but also in the indegeneous literary scene (particularly in Malayalam) with a focus on its correlation with colonial modernity. Nineteenth century Literature and its derivatives are hence of particular interest to me.”