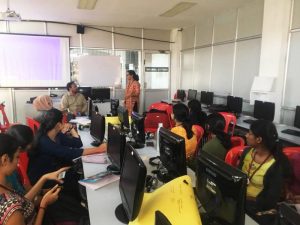 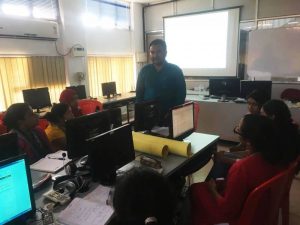 On the 12th of April, 2019 a two day workshop on Budget Analysis and advocacy was conducted by Mr. Jawed Alam Khan,from the centre of budget and governance accountability at St. Teresa’s college, Ernakulam.

The workshop aimed to give an insight into the formulation and implementation of the union budget in India. The target group was the students of the first BA Economics class .

The session began at 9 :45 am. An introductory session was conducted with regard to the basic aspects of a union budget comprising of the objectives , priorities and allocation of the same.

A group exercise was then conducted wherein the participating students were divided into groups of four . Each group was asked to formulate a budget for a family of five , given their income constraints. This exercise enabled students to understand the budget processes with relative ease.Several topics were discussed thereafter,such as the components of the budget, sources of revenue and expenditure, capital and revenue receipts to name a few .

A break was taken at 1:00 pm . The session resumed at 2:00 pm. In the afternoon session students were introduced to the concepts of budget deficits, public account, consolidated fund, contingency fund and the preparation of the budget which comprised of budget formulation, enactment,implementation and auditing. The session came to an end at 4:10 pm .

On the 13th of April , 2019 the second session on Budget Analysis and advocacy was conducted by Mr. Jawed Alam Khan At St. Teresa’s college,Ernakulam. The session commenced at 9:30 am. Mr. Khan gave the students a brief recap of the topics covered in the previous class .

After discussing the budget for disadvantaged communities, women and children , a practical session was conducted from 10:40 am to 11:10 am , where students were made to analyse the budget and calculate the percentage share that each community held in the total budget . Similar exercises were conducted throughout the course of the day.

Other topics covered include salient features of SCSP, TSP, the 73rd amendment, the federal architecture of India , decentralisation of power and the major sources of panchayat finances.

The session came to an end at 4:00 pm. The seminar was educative, informative and very useful to all.