As part of TROP activity, 35 IInd  year B. Sc. zoology students of St. Teresa’s College and the staff co ordinator Dr Reema Kuriakose visited Reena Memorial Special School, Cheranelloor on 26th June 2017, to get acquainted with the students of the school. During our initial visit, the children who were able to speak properly introduced themselves while others listened and encouraged them. Reena Memorial Special School takes a novel and effective approach towards teaching differently able children. Our aim was to interact with the students and teachers at the Special School and find the thrust areas where they require assistance from us, to identify slow learners and assign them to mentors who will coach and support them throughout the year, to  provide the differently able students exposure through creative activities, games and cultural programmes. I year B. Sc. zoology students were divided into two groups which was lead by Mariya liz correya and Natasha Dilip, to coordinate and manage the TROP activities, 2017.

On July 26th , 15 students  went to the school, helped the teachers in their classes in encouraging the students to write letters and numbers .  For those students who could not speak , an activity was done where pictures of certain utensils or objects were shown  and the children enacted  the uses of the utensil shown and other children identified it. Children were quite excited and waited patiently for their turn to come. This activity  enabled them to improve their motor skills and communicative skills through gestures and actions .Some of them sang songs and told stories. In higher classes,  students were assisted in reading out their text books and other small excercises . Students  were taught to make artistic objects neatly .

On 8th August 2017 , as a part of the TROP activity, group A led by IInd  year B. Sc. zoology student- Maria liz went to samrakshana school. Initially a game session was held for the students which boosted them. 16 students were grouped to 8 different classes along with a teacher.  Children with special needs were assisted in learning to enable them to realize their full potential. Students of higher age groups were allotted for laundry,stitching,ironing etc. thereby opening a way for earning along with studies. The classes were made attractive by the artworks done by the students. Students were also taught to draw clocks and read time. A talent show was conducted to discover their talents in which a few enacted their favorite actors. During the final session all the students assembled in the auditorium and games were arranged for them.

On 6th October,  group B students lead by IInd  year B. Sc. zoology student- Natasha Dilip,  visited samrakshana school for TROP activity.  In the beginning, students were engaged in yoga and exercise practices. Students helped them to cope up with their syllabus. The students were free to choose appropriate subjects with which they were  comfortable with . Group of two students were assigned in each classes. On daily basis, they recorded their activities and assignments and filed them properly. An interactive session was also arranged in which, they freely expressed their thoughts, imagination skills and the way in which they analyze things.

On 11th November, group A students, lead by Maria liz correya  visited  Samrakshana school. The students were taught, numbers and  alphabets and were asked to arrange it in order which enabled them to improve their mental ability and identification skills. colors were taught using colored balls. Students of higher class were helped in their academics and also with their  assignments by the degree students.

On 18th of December, 2017 IInd and  IIIrd  year B. Sc. zoology students went to the Reena Memorial School  Samrakshana to celebrate Christmas with the students. Games were conducted and gifts were given to the students. Children of the school enacted  a beautiful play on the birth of Jesus . The program concluded with the prize distribution session in which all the winners of the games were presented prizes by the staff.

In connection with the Teresian Rural Outreach Programme (TROP) of St Teresa’s College, Ernakulam, The Department of Zoology also organised an Awareness Programme n the month of January In the government schools in Tripunithura region. 35  students of II DC students were divided into 4 groups and were allotted to 4 different schools. On 22 January ,9 students visited R.L.V Govt. Model School, Tripunithura and took class regarding general issues like plastic pollution , biodiversity and vitamins and its deficiencies. 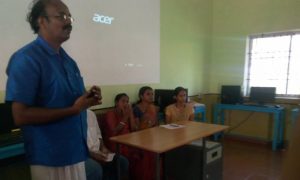 On 23 January, group 2 comprising of 9 students had been to Govt. High school, Thiruvankulam to spread awareness . 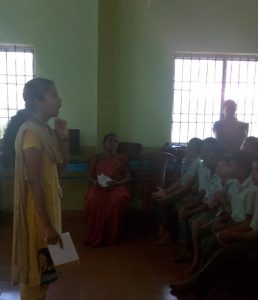 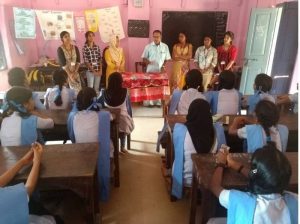 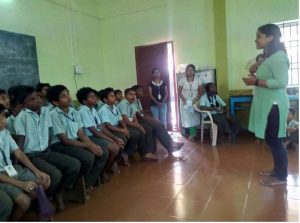 Students were very active , attentive  and they interacted with their genuine doubts which made the classes lively. Head master and the faculty members were very supportive and they also appreciated our effort to spread awareness about the current social issues.