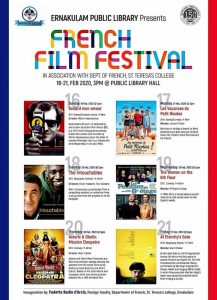 The Department of French in association with the Ernakulam Public Library organised a French Film Festival from 16 Feb 2020 to 21 Feb 2020 in the Public Library Hall. The festival was inaugurated by Fadette Badie D’Arcis, the Foreign Faculty of the Department of French. This show was an opportunity for every movie lover to come together and explore some of the greatest French cinemas that has lasted through the ages like the comedy-drama « Intouchables » directed by Oliviers Nakache and Eric Toledano, which was one of the most viewed French movies in the world. All the movies filmed were truly inspiring and extraordinary.