ELECTION OF THE OFFICE BEARERS

Dr. Helvin Vincent and Ms.Cynthia Mathew Thaliath were nominated as the Staff Advisors of the association.

Inauguration of the activities of Zoology Association was done by Dr. A. V. Reethamma, Retd Head of the Zoology Department of Maharaja’s College on July 4, 2018 by handing over a bowl of fish to Dr. Helvin Vincent, Staff Advisor of Zoology Association.After the inauguration, Dr. Reethamma delivered a talk conveying a thoughtful message highlighting the importance of zoology in life. 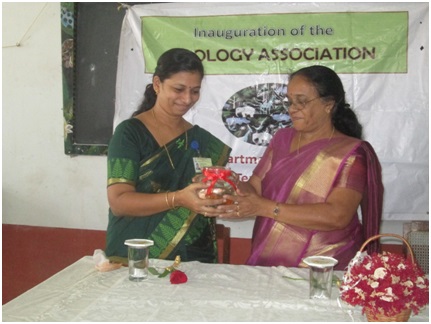 Students of Zoology department participated in the intercollegiate competition at Bharath Mata College, Thrikkakaraas part of the World Environment day celebrations on 5th June 2018. Sreenandana B. of 3rd DC won the first prize for painting competition. K.A Vaani of 3rd DC and Aneeta of 2nd DC won the 2nd and 3rd prizes respectively for the essay competition.

The fresher’s day was conducted on 20th June 2018 and 1st DC students were welcomed to the department. 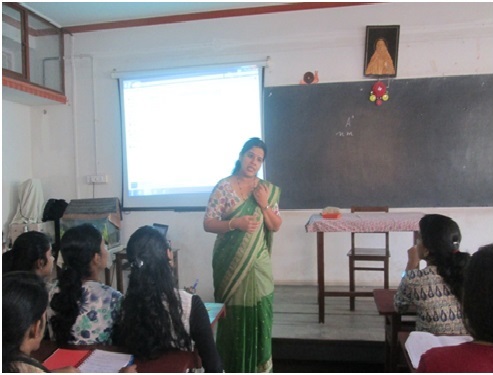 The first session was the keynote address by Dr.Vishnu Nandan on the topic “Diminishing Artic sea Ice: Why should we care about it? Current challenges in artic sea ice monitoring”. The various research options in Cryosphere Climate research was also discussed. 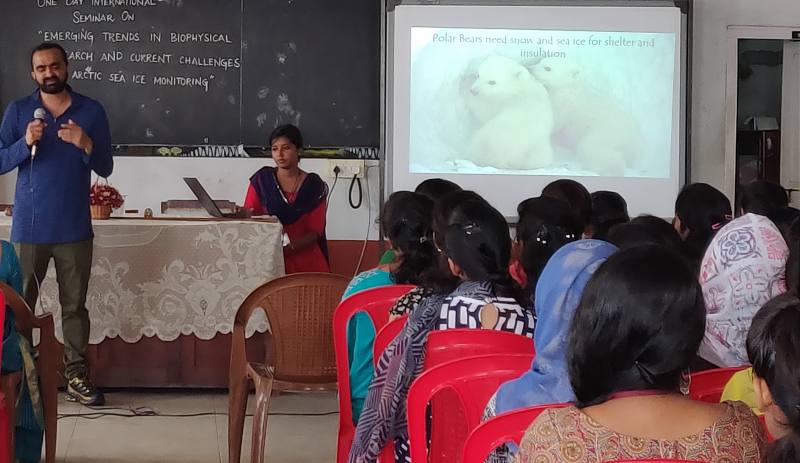 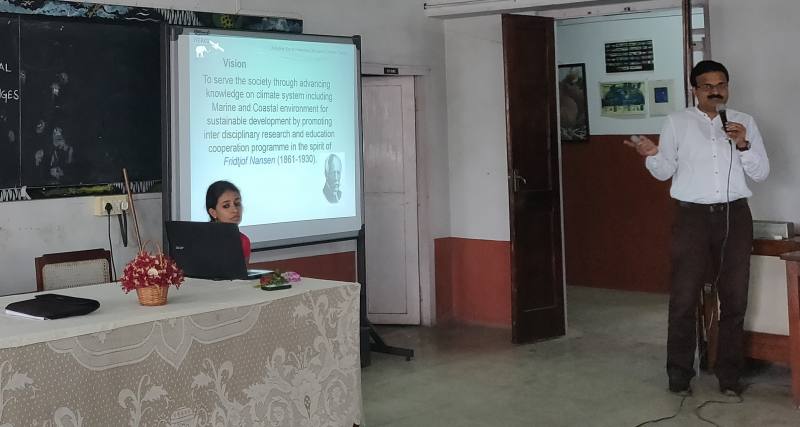 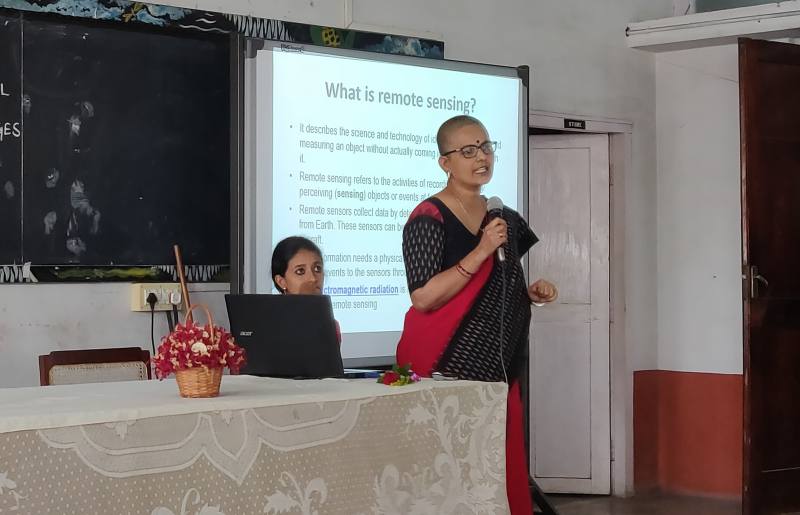 Sr. Rosalind Memorial inter-collegiate quiz competition was organized by the Dept. of Zoology, in association with the Rotary Club, Ernakulam on 9th August 2018. Students from 13 colleges participated. After the preliminary round 6 colleges were selected in the main round and Mr. Ajimon P. P. was the Quiz Master.

The first prize was bagged by Mahatma Gandhi University, Kottayam, 2nd prize was secured by Maharaja’s College and 3rd prize by Christ College, Thrissur. Cash prize, memento and certificates were distributed to the prize winners by Rev. Sr. Dr. Vinitha, Director of the College during the valedictory function.

Inauguration of the wildlife week was conducted on the 13th of December. As part of this inauguration, the Zoology department of St. Teresa’s college conducted a talk to raise awareness among the youngsters regarding the significance of birds. The talk was on ‘Common Birds Around Us’ by Mr. Basil Peter.He is an active member of the Animal Protection Committee and an avid photographer. UG and PG students of the department attended enthusiastically. 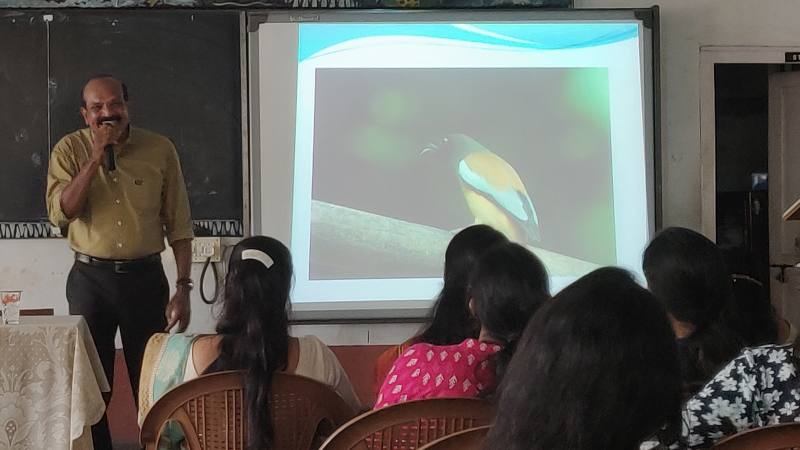 19 Various competitions were held in the following Wildlife Week for the U.G and P.G. students of Zoology Department.

The department organised the Christmas get together on 19th December 2018.Various competitions were conducted in which the students participated with a lot of enthusiasm. The programme started off with the Christmas carol competition, for which the PG won the first, 3rd years and 1st years bagged the 2nd and 3rd prizes respectively. 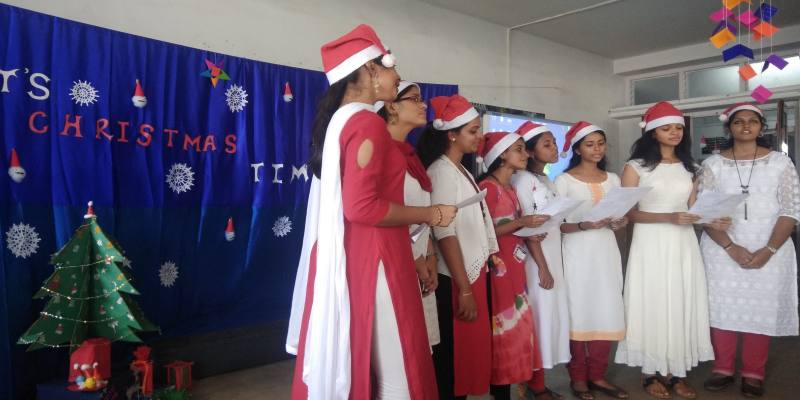 A live crib competition was also held in which PG, 3rd years and 1st years won 1st,2nd and 3rdprizes respectively. 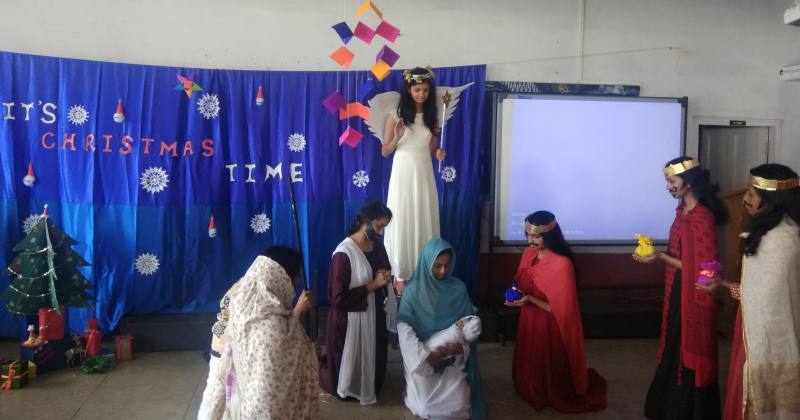 A quiz on the theme Christmas also had an active participation, in which the 3rd years won the 1st prize and PG and 2nd years won the 2nd and 3rd prizes respectively. The recipe writing competition added more fun to the festivities, for which the first prizewas won by Amitha Maria of 3rd year and Mitchelle Beveira of PG won the 2nd prize.

The Alumini meet of  Zoology department was conducted on 12th January 2019. Old students from various batches attended the meet and interacted with their teachers. Former Heads of the department Smt. Nalini Prasad, Rev. Sr. Francis Ann and Smt. Gladys Francis were also present.Dr. Lalitha Ramamurthy,alumni of 1978 batch, currently working as Professor at Wisconsia University, Madison, Canada shared her experience of working abroad and inspired the recently passed out batches of students to take up research.

Nazrin P A and Gulshan Ashraf of 2011 batch were crowned as Miss Alumni. 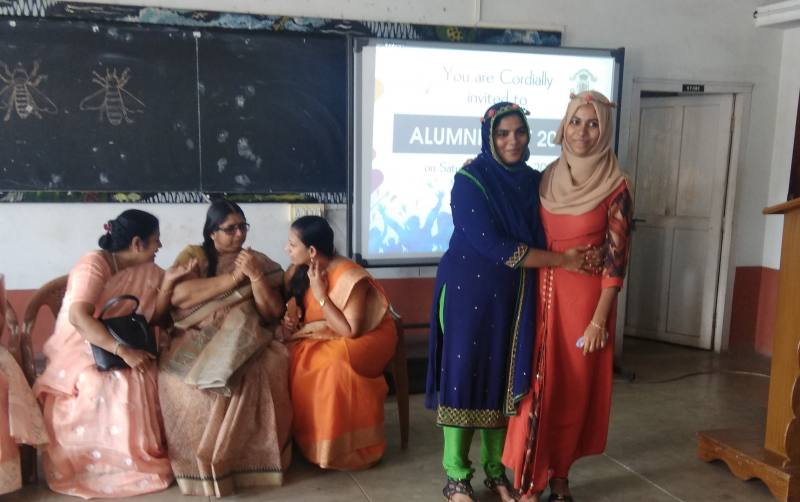 A career guidance class on the scope and the career options in medical coding was held on 16th January,2019. It was given by the Arown Academy, Kochi. Students of 3rdUG  and 1st PG attended the class.

The Plastic free Cheranalloor Project, implemented by Department of Zoology & Bhoomithrasena club, St. Teresa’s College ( Autonomous), Ernakulam under the “Paristhithikam Project” of Directorate of Environment  and Climate Change, Government of Kerala, 2018-2019 was executed  in the Cheranalloor Grama Panchayat, Ernakulam with the objective of making  the village a model one with minimum use of plastic.

Students of the Department of Zoology participated in the “Oikos-2019” organized by SH College Thevara on January 16th and 17th, 2019 and won the overall championship trophy for the same. Prize winners are as follows 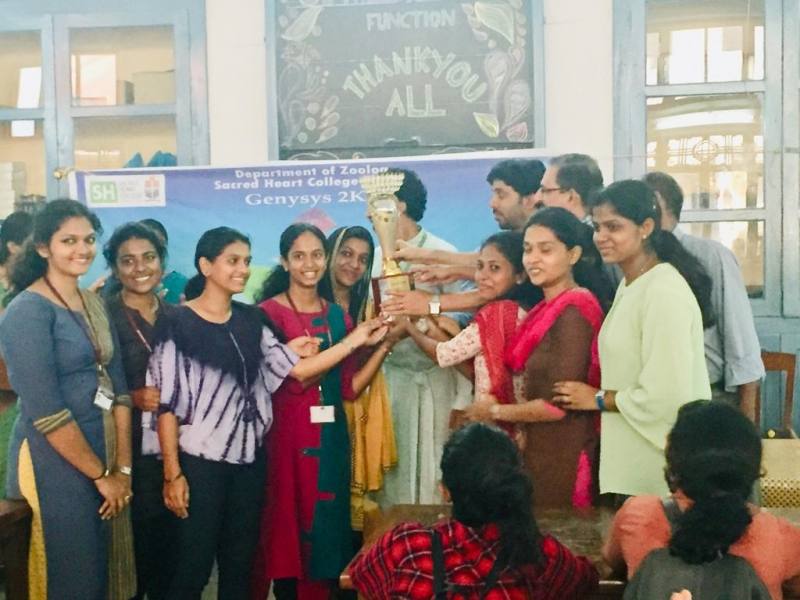 A talk on Polycystic Ovarian Disease by Dr. Anand Gopalakrishnan, Founder Director of Vihaara wellness centre was conducted on 24th January, 2019. Students of Zoology and Maths department attended the talk and was inspired to follow a Healthy Diet to decrease the chance of the disorder.

A total of 45 students of 3rd year U. G. and 2nd PG zoology attended the 5 day study tour to Belur,Chikmagalur, Dandeli and Malpefrom 23rd  to 27th January . The students were accompanied by two teachers,Dr. Soja Loius and Ms. Cynthia Mathew. The Journey commenced on 23rdJanuary at 6 pm from the college campus. 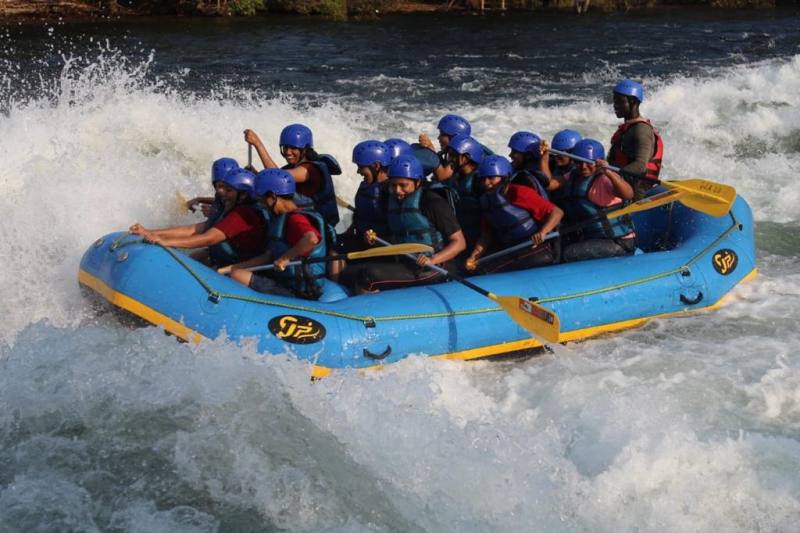 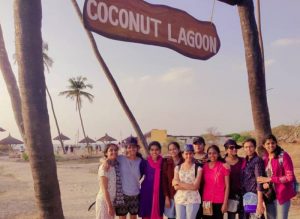 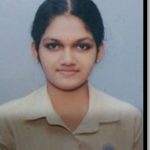 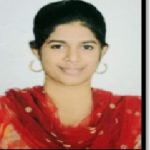 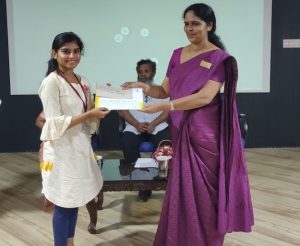 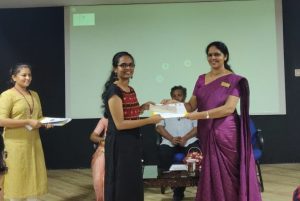 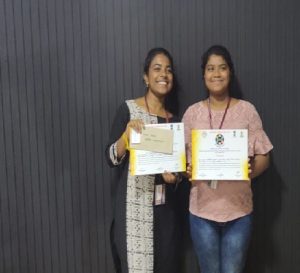 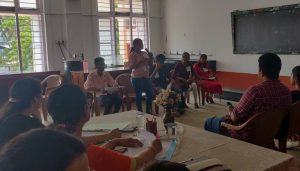 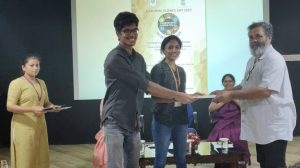 A seminar on the topic ‘Science and Logical Fallacies’ by resource person Dr. T.V Sajeev,Principal Scientist from KFRI, Thrissur was also conducted. 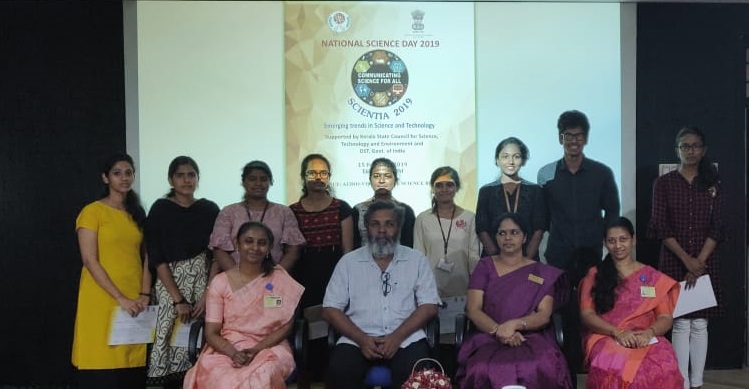 UG students of  all the classes of the  Department of Zoology actively participated in the TROP activity.

35 Students  of  I Bsc zoology  Class participated in the Rebuild Kerala Govt- survey of flood affected households of Cheranelloor panchayat on 15-09-18 and 18-09-18.

Students of II  B. Sc. Zoology  were involved in “The Plastic free Cheranalloor”  Project, implemented by Department of Zoology & Bhoomithrasena club, St. Teresa’s College Ernakulam under the Paristhithikam Project of the Directorate of Environment  and Climate Change, Government of Kerala. This project is focused on four main aspects :

21 students of  II nd Bsc zoology  Class went to 7 schools across Cheranelloor on 04/12/2018 to take awareness classes and training sessions for encouraging  the school students to prevent the  use of plastic bags and promote cloth bags. Assessment of the contest was scheduled on 14/01/2019 by our Bhoomithasena club members. 21 Bhoomithrasena club members visited the engaged 7 schools in Cheranelloor. The bags were counted and judged. Award distribution ceremony, launch of cloth diapers, sanitary napkins and bhoomithramsanchi exhibition which was organized by Department of Zoology and Bhoomithrasena club of St. Teresa’s College under  Paristhithikam Project of Directorate of Environment and Climate Change was held at  Little Flower U.P. school, Cheranelloor, Ernakulam  on 15th of January at 2:30 PM. Sony Cheeku , Cheranelloor Grama Panchayat President launched the cloth diapers and sanitary napkins and they were distributed among the young mothers .Prizes were distributed among the winners. 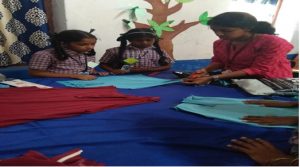 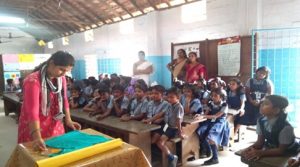 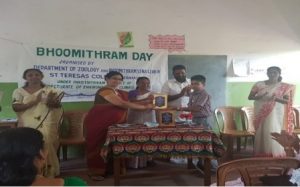 III DC Zoology students of St Teresa’s college, Ernakulam, led by Ann Fredy and Natasha Dilip  went to Reena Memorial Samrakshana Special School, South Chittoor, a special school for the children with learning  disabilities on  12/07/2018, 27 /07/ 2018, 29/11/2018 and 22/12/2018. Zoology students along with their teachers taught them to learn letters, numbers and also to draw different shapes . Some students were interested in drawing and coloring.  Our children helped them to draw basic shapes like fruits and other objects and helped them to colour the same. Our children also organized Christmas celebrations for them on 20thDecember 2018.Throughout the course of time spent among these children our students  learned how to deal with these children  love and understand their world which was far amazing and enriching than what we observed from afar.

4 . Removal  the plastic waste from the premises of  Hill palace, January 2019.

35 students of II  BS.c. Zoology  Class  along with Botany students also participated  in  removing the plastic waste from the premises of  Hill palace , Thripunithura on 19-01-2019. 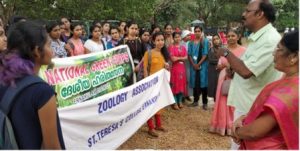 II B. Sc. Zoology and Botany students in the Hill Palace campus to remove the plastic waste.