‘Stain the Stigma — #Letstalkperiods’, a campaign by the Final Year students of the Department of Communicative English aimed at raising awareness amongst people about menstrual hygiene and eradicating the social stigma associated with it. The campaign kicked off on 18 December, 2017, with famous radio jockey, Joseph Annamkutty Jose, releasing the logo. During the launch, he spoke about his perspective of menstruation as a child and how it has changed over time. He pointed out that men are misguided, that they are not rightly aware about menstruation and that campaigns like these are the only way of spreading awareness. He wholeheartedly gave his support to the campaign and praised the students for choosing such a unique and relevant topic. The students performed a skit and flash mob on the same day to garner support and make the official launch more interesting. As a part of the campaign, the students also visited various schools and held sessions on menstrual hygiene and the taboos associated with it. Both boys and girls were made to attend the sessions together as opposed to the usual practice of segregation. This enabled them to tackle the topic head on and break the barriers without beating around the bush.

The first of such sessions was held on 5 December, 2017, for the 8th and 11th grade students of the Government Higher Secondary School, Elamakkara. During the session, the students were given an insight into the various misconceptions and hygienic practices regarding menstruation. They were introduced to the topic using clippings from popular movies, videos, a dance performance and a skit. Ms.ReenaMadhu and Mr.Fabel Varghese, Professors of the Department of Applied Psychology and Counselling, Toc-H Institute of Science and Technology handled the classes on menstrual hygiene and taboos. They also guided a session at CCPLM School,Thevara.  Sessions were also held by Dr.Teena Anne Joy, Gynaecologist and Laparoscopy Surgeon, Aster Medicity who educated the students of Our Lady’s Convent GHSS and Rajagiri HSS, about menstrual hygiene.

The campaign didn’t restrict itself to Kochi; the students also organised sessions at the KPR GopalanSmaraka GHSS, Kannur under the guidance of Dr Smithy Sanel George, Senior Consultant, Laparoscopic surgeon and Ms.DijinaPavithran, Clinical Psychologist, Kannur. An awareness programme was also conducted for the UG and PG students of St. Teresa’s College, where the students were taught the importance of spreading menstrual awareness. The highlight of the campaign was the fundraiser “Chill- with -Gill’ which aimed at breaking down the misconceptions associated with menstruation. Everybody’s favourite stand-up comedian Kanan Gill ensured that the audience had the time of their lives; he presented an evening filled with endless laughter and also made the audience think about the issues related to menstruation. The programme also included an open mic event, where people in and around Kochi showcased their talents. Vishak Nair, popularly known as ‘Kuppi’ from the movie Aanandam, tickled the funny bones of the audience by talking about his experience with girls. RJ Anjali Uthup, of Radio Mango, voiced out her opinions about menstruation. She made the girls proud about bleeding red. Celebrities including ArchanaKavi, Prayaga Martin, Apoorva Bose and Roshan Mathew attended the event.

Stain the Stigma intends to tear down the taboos associated with menstruation. The students feel that the hour of change has come and no more should women be shunned or weighed down by the stigmas surrounding menstruation. The campaign was well received by people in and around Kerala; it went viral on social media platforms where real life experiences and anecdotes were shared by famous personalities like Director ArunGopy, Cine Actors ParvathyMenon, ArchanaKavi, AparnaBalamurali, Prayaga Martin, Gayathri Suresh, Anumol, NiranjanaAnoop, Malavika Nair, Ganapathi, ShruthiRamachandran, music composer and playback singer Rahul Subramaniam, as well supporters and well wishers from across the nation (the links to our social media pages – Instagram- https://www.instagram.com/stainthestigma/ ; Facebook- https://m.facebook.com/stainthestigma/). The narration of such experiences brought about a normalcy around menstruation, a socially stigmatised subject.

The proceeds from the fundraiser, ‘Chill with Gill’, have been donated to deserving communities and institutions around the city to provide sanitary napkins and ensure menstrual hygiene practices. The funds were handed over to identified institutions by Mr. Prasanth Nair IAS, Private Secretary to the Minister of State for Tourism and Former Calicut Collector on 26 February 2018. The proceedings were donated to St. Joseph Cottolengo, Special School for Women and Children, Fort Kochi; ValsalyaBhavanAmmathottil, Orphanage for girls and Children, Thammanam; Angel Care Home, Hostel for Tribal Girls, Kothamangalam and MahilaMandhir, Orphanage for Women and Children, Champakkara to purchase menstrual hygiene products. An amount of one lakh was donated to these institutions in the form of vouchers, which will be valid for a period of ten months (March-December 2018).

At the event, Mr. Prasanth Nair IAS, addressed the gathering highlighting the relevance of the campaign in the current scenario. He appreciated the effort of the students to bring such an issue to the attention of the public. He added, “It is high time to educate both boys and girls as well. But most importantly, it is important to help those who are the lesser privileged in society.” He appreciated the students for doing so. The other guests who shared their views on the campaign for the event were popular actor and vlogger, Ms. ArchanaKavi and renowned RJ, vlogger and author Mr. Joseph Annamkutty Jose. Ms. ArchanaKavi spoke highly of the students who were able to come up with such a great initiative at a young age. RJ Joseph Annamkutty Jose also encouraged the students asking them to raise their voice so that the world could follow. 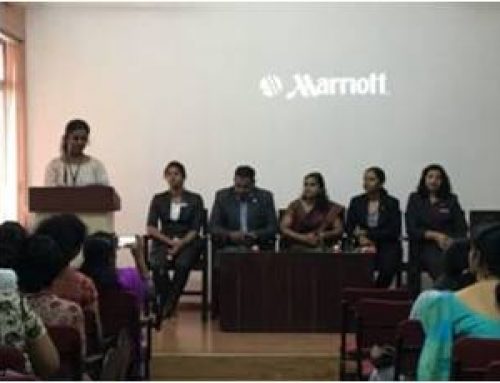 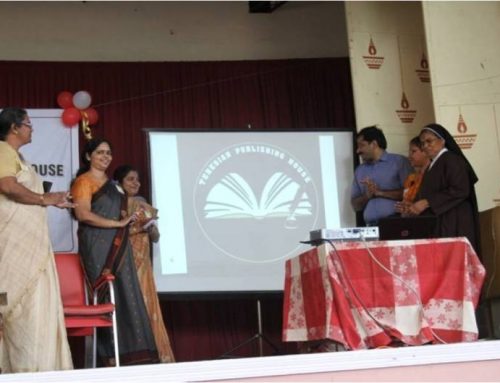 Skill Development Programme for Transgenders on 18/11/2017