‘Project Zero- Waste Free Living,’ focuses on the urgency to adopt a waste-free lifestyle and letting the public know how easy it is to make the switch to eco-friendly alternatives. The aim of the campaign was to create and promote awareness about zero waste lifestyle. The amount of waste generated by society is increasing exponentially and it is high time people started giving importance to its huge impact on the environment. The campaign aim was to make people rethink and understand the urgency of the issue, which could potentially have catastrophic consequences if not dealt with. It would also introduce to our target audience environment-friendly and sustainable alternatives that may be adopted.

On 11 November 2018, the Instagram page of the PR Campaign Project Zero began functioning. It features all the updates regarding the campaign, and videos of people who have taken small steps towards the zero waste lifestyle. 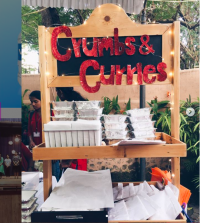 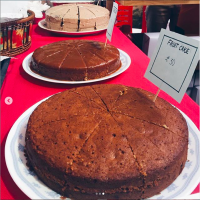 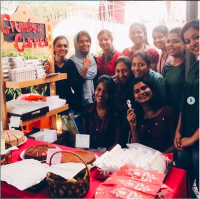 On 5th December 2018, in association with the Annual Christmas Sale, a food stall ‘Curries & Crumbs’was put up by the students to raise funds for their campaign. Drinks and homemade food prepared by the students were exhibited for the sale.

To initiate the objectives of the campaign from the campus, a weeklong interclass competition called ‘Track Your Trash’ was held from 10 December 2018 to 14 December 2018.  It was conducted to observe the number of non- biodegradable wastes generated in a day in each classroom. The classrooms were monitored and evaluated, and the classes with the least number of non- biodegradable trash were awarded cash prizes.

The campaign was officially launched on 20 December 2018 in the Platinum Jubilee Auditorium with the release of the official video of the campaign, which was created by the students. The winners of ‘Track Your Trash’, I PG Mathematics and III DC Zoology, were also announced on the same day. 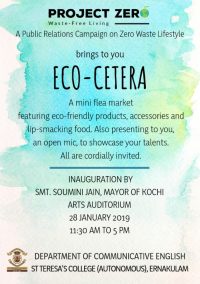 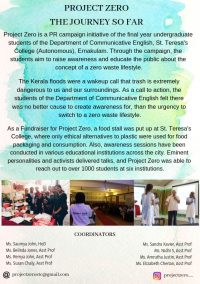 Kochi Mayor Smt. Soumini Jain said that the Kochi Corporation would strictly enforce the segregation of waste at source. Waste would not be collected from homes unless it is segregated, she said. The Mayor was speaking at the inauguration of ‘Eco-cetera,’ an eco-friendly flea market. The flea market was part of ‘Project Zero,’a Public relations Campaign being organised by the Final Year students of the Department of Communicative English to raise awareness on a zero-waste lifestyle to reduce generation of waste.

Ms. Jain said that while the Brahmapuram waste treatment plant in Kochi is still developing the capability to deal with the massive quantities of waste generated in the city, the public also had to support waste treatment activities by segregating waste generated right at home. She spoke about how people constantly dispose waste in public areas, further polluting the city and worsening the waste management situation. Even when people segregate waste, they often wrap bio-degradable waste in plastic bags before disposing it, she said. The Mayor lauded the students’ initiative to suggest eco-friendly alternatives to wasteful products. Other dignitaries present were Mr. T.M. Venugopalan, Retired Senior Supervisor of Research and Development at Hindustan Paper Corporation, Dr. Tessy Anthony C., Associate Prof. and Acting Principal of the college and Ms. Saumya John, HoD, Department of Communicative.