The department of Zoology in association with Bhoomitra Sena Club of St. Teresa’s College (Autonomous ), Ernakulam observed World Evironment Day on 16th  June 2017 .The programme was supported by Kerala State Council For Science And Technology (KSTCE)  and the focal theme for the year is “Connecting People To Nature”. The official inauguration commenced by the proposal of the inaugural address by Dr. C. N Manoj, Trustee, Pelican Foundation, Cherthala. The head of the department Dr. Reema Kuriakose welcomed the gathering and Rev. Dr. Sr. Vinitha, Director, St. Teresa’s College (Autonomous), inaugurated the function by handing over a sapling to Ms. Maria Liz Correya of IInd DC zoology. The inauguration concluded with vote of thanks proposed by Ms. Linda Therese Luiz, faculty in charge of Bhoomitra Sena Club. 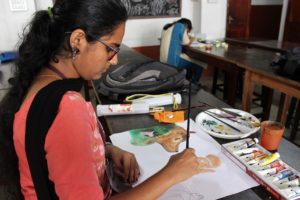 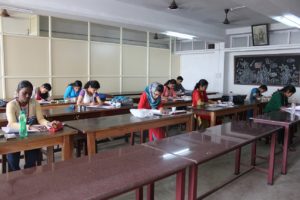 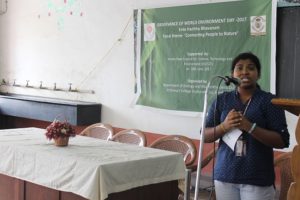 This was followed by a talk by C. N Manoj on the topic “Ente Haritha Bhavanam”. He pointed out the impacts of environmental deterioration as a result of excessive use of plastics. He also emphasized the importance of spirituality, various initiatives and awareness programs for the protection of environment. Inter collegiate Elocution and Painting competitions were conducted as a part of the World Environment Day Celebrations – 2017 in which students from various colleges (21 students) participated. The program concluded with the prize distribution ceremony. Certificates and cash prize were awarded for the winners. 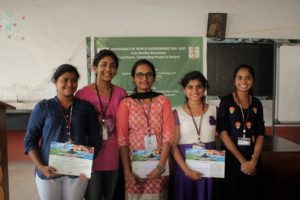 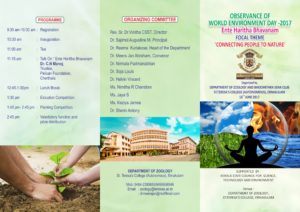