On 15thSeptember, 2017, the department of management studies conducted a talk on ‘Big ideas in advertising’ by Ms. Parvathy Mohan, Brand Strategist and Mr. Ramesh Ranganath, Director-Creative at  TWBC Marcom,one of the leading advertising agency based in cochin with an objective to enlighten the students about the new trends taking place in the world of media and how  big ideas in  advertisement is generated to capture the hearts of the people.

The seminar started with explaining the students on how to plan media for the target audience by Mr. Ramesh Ranganath. Later,he was followed Ms. Parvathy who made the students understand on how to bring creativity in advertising and how the content should be moulded in an advertisement, so that it make sense for the clients. Some interesting ads of famous brands like Kissan, Porsche, The economist etc. were also shown to make the students realize how every content in the ad is creatively conveyed to the customers that directly affected the perception of customers towards the brands. She also elaborated the copywriting process in ads and also showed the students some interesting advertisements that generated the essence of humour and sarcasm. Advertisements that were issued for public interest were also presented as an example to explain students as how some advertisements are also made for spreading awareness and educating the audience on ethical values. Finally, the talk ended by throwing some light on the future of advertising through use of technology in advertising by Augmented reality shows and 4D pictures.

The seminar was concluded with question answer round in which students discussed about the new trends in advertising and upcoming careers in advertising. Vote of Thanks was given by Ms. Vaishakhi. R Kamath thanking our guests for spending some time with us from their busy schedule and making us aware of the various possibilities in the world of media and advertising. The overall response from the students was also very positive and  help made us know the practical aspects of advertising and generation of big ideas in ads. 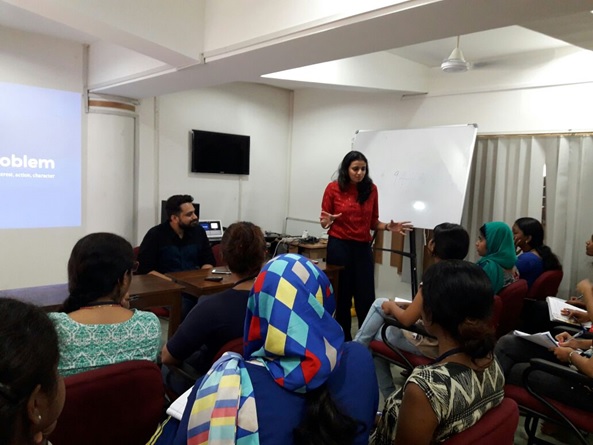