A programme “BEGINNEN 2K18” was conducted during 19th and 20th of January 2018. Beginnen 2K18 is a platform for people with high determination and hunger to sell their innovative ideas globally. Ideas were judged by entrepreneurs from various disciplines. The judging criteria was based on problem/opportunity, feasibility, market and solution/plan. Each candidate/groups  were judged on a 1-10 scale based on the criterias. The program was scheduled for two days. Beginnen 2K18 was inaugurated by Dr. K S RadhaKrishnan (Former Kerala PSC Chairman). There was a session on startups by Mr.Jogin Francis, which gave an introduction to various startups at present. Around 15 teams participated in the event  and first prize was awarded to students from John Cox Memorial CSI –IT .The award winning idea was “EYE FOR YOU”. First Prize included  Rs 50K or  office space including support for company registration. Second price winning team was from BTC College, and the idea presented was “Power Generation from road”. Third prize was awarded to “Green Electricity” for another team from BTC college. All the students of B.Voc attended the two day programme, as well as many of them volunteered. 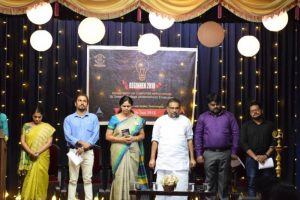