Activities of the Home Science Association 2017-18

Activities of the Home Science Association 2017-18

The activities of the Home Science Association for the year 2017-2018 began with the election of the office bearers on 21st June 2017.

The following students were elected as the office bearers.

The activities for the year were chalked out by the office bearers and executive members along with the staff advisor. It was decided that the thrust of the year’s activities would be on tapping the creativity and innate skills and talents of students and teachers of the department and alumni. Interactive and motivational sessions with experts in the field of Home Science, career guidance sessions was also planned. A novel initiative of this year is the conduct of the Home Science fest ‘Ekta 2017’ to widen the horizons of Home Science beyond our walls and promote the awareness and scope of Home Science to school students and the community at large. A plethora of intercollegiate competitions, exhibitions and talks for school students, stalls, demonstrations is to be conducted. All the activities are to be undertaken with the underlying concept of Eco-friendliness.

The activities of the association for the year 2017-18 was inaugurated on 4th July 2017, by Mrs. Jiji Ramesh, our alumni, with a professional experience of more than 30 yrs in different management positions. She had worked in  various capacities in various fields of government and  private institutions –  in a  gazetted Rank in Kerala State Government Service ,was Airport Director of Cochin International Airport , Nedumbassery, was Head HR of Bangalore International Airport  and was Managing Director of several IT and educational institutions ,was Joint secretary, Kerala Management Association and is presently in the executive  board of various institutions. With her vast experience and charming disposition she spoke of the ways in which women can be empowered to give their best to the community and still balance the home and family.

The teaser and logo for the Home Science Fest ‘Ekta 2017-18’ was officially launched and released by the Head of the Department Dr.Betty Rani Isaac on the occasion. 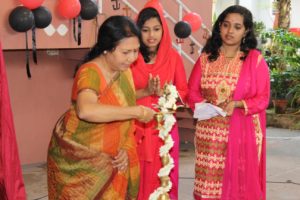 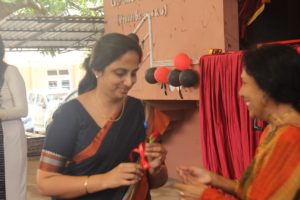 an of CD and Ms.Ann Mary Roy were also felicitated by Dr.Nisha Vikraman.